Summer 2020 – Summer camp for youths with ostomies
Ostomy Canada Society’s Youth Camp, for young people between the ages of 9 and 18 years, with an ostomy or related special needs, will take place in Bragg Creek, Alberta, in July 2020. Contact the Ostomy Canada Society for more info.

Update: Understandably, the camp had to be cancelled for summer 2020 because of the COVID-19 pandemic. But I’m sure they’ll be back soon, better than ever!

2019 ostomy calendar
Stomawise, an internet-based support network in the UK for people with ostomies, has come out with their 2019 calendar, featuring photos of 12 ostomates proudly baring their bags, to increase ostomy awareness. Don’t worry if you’ve missed the boat. I’m sure there’ll be a new one next year.

May 2017 – 101-yr old skydiver with colostomy
William Verdun Hayes of Somerset in the UK broke the Guinness World Record by skydiving at age 101 years 37 days. Verdun has had a colostomy since he was 78. “Professional daredevil Verdun put his vitality in later life down to his need for adventure, and doesn’t let his reliance on a colostomy bag stop his zest for life. He actually made his debut skydive last year to celebrate his 100th birthday.”

May 2017 – Relief for ostomates in Syria
Two UK-based charities – Stoma Aid (at the time, a project of The Colostomy Association) and Hand in Hand for Syria – combined forces to bring donated ostomy supplies to people in some of the hardest hit and most difficult to reach areas in war-torn Syria. “Thousands of people living with a stoma across the world are unable to access basic stoma supplies. In some cases people use improvised objects such as tin cans, plastic bags, crisp packets and bits of cloth.” Their first shipment in April 2017  included 60 cartons of stoma bags, sprays, wipes, creams, dressings, bandages, and underwear. 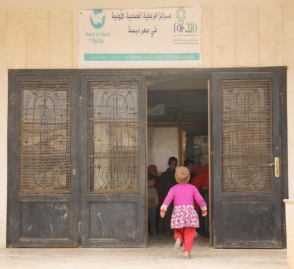